In February 2008, Mike & I walked into an estate agent office and were introduced to a mortgage broker called Jamie. Whilst he found the perfect mortgage in our meagre budget, we sat chatting like old friends, us sick of living between two counties and Mikes job on oil rigs, Jamie besotted with his new daughter. Little did we know our lives would continue to be entwined.

In February 2019 Jamie, his incredible wife Alison, who did 99% of the organising, and their amazing, colleagues, friends and wellwishers, held a ball in memory of our Son James. In the 11 years between the two events, Jamie’s company Affinity had sorted our life & home insurances (despite Mikes crazy job and my complicated health issues), our Wills and another mortgage to our dream family home in 2016. We trust the staff at Affinity with quite literally our entire lives worth of important admin and cannot recommend the firm enough.

When I posted a video about losing James, the Affinity team saw and cried along with my heartbreak, at which point they were looking for a charity to support as a firm and they, like us, had had no idea that our local hospital Southend University hospital, had a baby bereavement suite and services.

Jamie asked us to come in to discuss fundraising ideas. In the course of the catch-up, Jamie suggested a Valentines Ball in James’ memory and we were introduced to Dean & Mark, two of the Affinity colleagues who were signing up for a 50-mile ultramarathon – again for James. Humbled by the kindness and sincerity, we left the meeting speechless and our broken hearts warmed.

So in February 2019, Alison had organised the Affinity Valentines Day Ball – In Memory of James Garrick. The event was held in Leigh on Sea’s Arlington Rooms, a formal do with a 3-course meal, an auction, live music from the phenomenal Voice Contestant Sarah Tucker (who also works with Affinity!) with a live band and DJ.

What an event it was, glamorous but with a real sense of love and unity for Mike and I. As you’ll see in the video below we had a lot of fun and Jamie made a humorous and heartfelt opening, then it was my turn reading a speech to over 100 people.

Telling them about my beloved son and holding it all together without a glass of bubbly in my system, as I was already 2 months pregnant again. I held it together until the very end when the crowd gave me a standing ovation – even as I write this the emotions (and I suppose hormones given that I’m now 7 months pregnant) rise in my throat and there are tears in my eyes. (Both speeches are included in the video).

Dean & Mark went on to do the ultra marathon in May, making it to mile 43 before injury and time constraints halted their mission – we were so proud of them and they like Jamie and Alison have become honorary uncles & aunt to both James & our rainbow baby due in September 2019. You can still donate to their JustGiving page here and the ball raised £7918.82.

I don’t know, but I hope the whole Affinity team realise how their efforts, support and bad dancing (Mark & Mike! – see video 16 mins 40 seconds) have helped lift us from a dark place and their work will help so many other bereaved parents. I do know that they have even more plans ahead to support the charity but we’ll never be able to thank them enough. 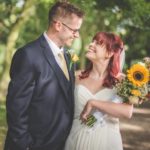